As the pressure to secure the best talent mounts, HR is rightly questioning the real value of one of our most favoured talent tools – the 9 Box Grid. 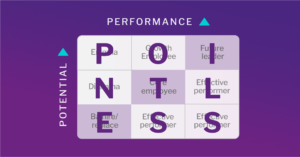 Just in case there are any non-HR people reading this, the 9 Box Grid requires you to place your team members in one of the 9 boxes by assessing their performance (low, medium or high) along one axis and their potential (little, some or lots) along the other. The idea being that you have an overview of the bench strength of your team and you are able to identify your top talent, develop it to its full potential and stop it sneaking off to another company. A sensible and laudable aim but one that in reality is fraught with problems and frustrations. What follows is a scenario that may be familiar to any HR folk out there unfortunate enough to be experiencing 9 Box Grid fatigue…

It’s “Talent Review” time and you are charged with identifying the top talent in your area and contributing this to the group wide analysis.

You can’t believe it’s come round again so fast, sigh heavily and go to the HR toolbox to take out the 9 Box Grid.

You spend several weeks getting meetings in diaries with relevant leaders to go through the 9 box grid.

Leaders are confused by the 9 box grid and ask questions like “potential for what?” and “by when?” or “How do I know if someone has potential?” and “How is performance different from potential again?”

Having agreed with your suggestion “not to overthink it” (which you made when you realised you were never going to get them completely clear on the “performance/potential” criteria), the leaders then spend another age coming up with new descriptors for the 9 boxes including “Rough Diamond”, “Questionable Fit” and “Enigma”.

Leaders seem to struggle to do the exercise properly, for example, trying to put most of their people in the top right hand box, including those 6 weeks away from retirement or who won’t relocate even though there are no promotions available where they are.

Leaders ask whether they should inform their people where they sit in the grid and worry about those they identified as having “absolutely zero potential” especially when you explain that their placement in that particular box means they ought to be managed out. They then decide they are probably in another box after all.

You try to answer all their questions and challenge their decisions but compromise on a few reassuring yourself that “It’s a journey – they’ll get better at it over time”.

You take the information away and spend hours trying to get the names into a PowerPoint/Word/Excel document.

You breathe a huge sigh of relief and send all of the completed grids off to the Group Head of Talent.

Weeks later a high level meeting happens where countless 9 box grids are reviewed by Directors who argue about the half a dozen people they may have met once or twice and calibrated grids are signed off. Immediately before this meeting you realise that several names have resigned or changed jobs and so grid should have been updated.

Some months later – a vacancy! You eagerly pull out the assorted 9 box grids and remind the hiring leader of the names in the top right hand box. None of them are chosen.

I hate to think of the hours I have spent trying to complete this grid and the resulting frustration when nothing seemed to happen with the names – whichever box they are in. There are numerous reasons why the 9 box grid is a pointless waste of time – here, in my view, are the top three.

1. Our data is wrong

There’s been a lot written about how it’s almost impossible to accurately assess someone’s performance, let alone their potential, but probably the most brutally honest perspective comes from Marcus Buckingham and the work he did to expose the inaccuracy of performance and potential ratings. As he says in his illuminating article for HBR “The research record reveals that neither you nor any of your peers are reliable raters of anyone. And as a result, virtually all of our people data is fatally flawed.” Scary stuff, given that these ratings, in theory at least, have a significant impact on our reward, our promotional prospects and our motivation.

2. The Grid becomes the outcome

The leaders I have worked with who actually enjoyed the exercise of completing the 9 Box Grid were always those who got a kick from structure and process rather than the great people leaders. The latter were able to do the exercise fairly quickly but it didn’t create any real value for them as they already had a clear picture in their mind about their people and some idea about how they were going to develop, manage or reward each of them. The leaders who enjoyed the process of categorisation were typically the ones who did little with the results and saw the activity as being completed the moment they placed the last name on the grid. We know that great talent management is all about movement – moving up, around, in, out and yet the 9 Box Grid often fails to generate that movement and becomes more about allocation. I can see that having a snap shot of your senior teams at a point in time might be useful as a wake-up call or a reassurance but not much more and, given the inaccuracy of that snap shot, why bother to do even that?

Whilst the scenario outlined at the start is extreme, it’s not unusual for talent reviews in larger organisations to take several months to complete. Not only is this time consuming for questionable results, it just doesn’t mirror the true pace of most organisations. Every 9 Box Grid I’ve ever produced was always out of date by the time it was complete and leaders who want to move quickly to recruit or promote are justified in their irritation at the time it takes to get a perfect picture. These set pieces that we create in HR are not helping our credibility. We talk about regular conversations and agile development and yet we allocate the key talent activity to only certain months of the year?

So we spend crazy amounts of time and effort producing a complicated grid that is inaccurate and doesn’t add value. Not a great use of time at best and at worst, yet another HR activity that fails to add value and destroys our credibility. And yet, the talent agenda is consistently top of the CEO’s list in every survey out there. We need to find alternatives to the rigid processes we have developed that are designed not to create movement or enable individuals achieve their potential but to ensure poorer managers are categorising their people into neat boxes.

If you enjoyed this blog from Disruptive HR, you can get future ones sent direct to your mailbox by signing up here. 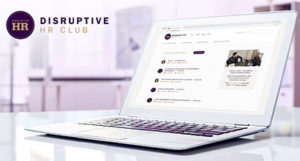 If you’d like to get all of our content, wherever and whenever you want, why not join the Disruptive HR Club?!

Leading through disruption (The EACH Model)

Find out how to lead through disruption using the EACH model – Employees as Adults, Consumers and Human beings.

We’ve put together a few tips and an example of a Head of Diversity job spec to help you get started with creating an inclusive culture where everyone can do the best work of their lives.

Watch our animation looking at the wave of new trends in hiring that can boost your employment brand and transform the experience for hiring managers, candidates and HR.