Innovation in Diversity and Inclusion Part 1

After four years of running Disruptive HR, meeting hundreds of HR professionals, 50+ articles and two books – I have finally got around to writing about disrupting Diversity and Inclusion! This negligence on my part doesn’t stem from a belief that D&I is fine as it is and doesn’t need disrupting – sadly, far from it – it’s just that all our research into innovative practice didn’t really result in anything that exciting.

But I can’t put it off any longer, mainly because I’m in danger of running out of HR areas to write about! And the good news is that, actually, if you can find your way past the ‘best in class’ awards for running yet another hi-po programme for diverse candidates or mandatory unconscious bias training for leaders – there are some really interesting approaches out there. And even better, they are working!

This D&I blog is two parts. This first one will look at what we’re doing today and why it isn’t working and will suggest some new approaches. The second blog, which will be out shortly, will delve a bit deeper into these new approaches and will provide some concrete examples of them in action.

So, why do traditional approaches to D&I rarely have much of an impact? There is a great book (one of the few great D&I books I reckon) by Tinna Nielsen and Lisa Kepinski called Inclusion Nudges. They reflect on the fact that, despite huge investment and lots of effort, truly diverse and inclusive companies remain few and far between. They list the typical D&I efforts that are adopted by the majority of organisations. I recognised my disappointing efforts in all of them!

First we have the Compliance approach, where D&I is driven by the numbers. We set our leaders targets for increasing numbers of X, Y or Z and have them send us their action plans of how they plan to get there.

There’s nothing wrong with having some numbers to aim for or to measure yourself against. The problem comes when the numbers become our only focus, to the exclusion of our real purpose;  to increase the true diversity and inclusiveness in our organisations. I can recall having a full blown row with my board about whether the ‘people with disability’ stats we were using for benchmarking were robust enough. The debate was all about the numbers and completely missed the fact that we all knew we had an issue and what should we do about it. With a Compliance approach we rightly hold people accountable – but we also create a more punitive culture which can drive leaders to some short-term choices that aren’t really building a more diverse company. A leader once told me “I don’t really care who gets the role as long as they’re not white”, so he could avoid another ‘telling off’ when his D&I stats were reported.

Then there’s the Charismatic Personality approach where an area of diversity is tied to the championship by one individual.

It’s great of course when you have a leader who cares passionately about a particular issue. Their status and their energy can shine a light on a cause, and you seem suddenly to be able to move mountains after years of being ignored! The downside is when they move on (or find another cause …) and you realise that the organisation has reverted to relative indifference.

There’s the Fix The Difference approach which is pretty common. Our focus is all about helping the minority rather than engaging with the majority and changing implicit norms.

We have our programmes designed to help minority groups stand out, get promoted, be better leaders, communicate more effectively – but the organisational culture is often off limits. As a lone senior female on male-dominated boards, I always found this approach problematic and slightly patronising. “Learn to be like us and you’ll get on” seemed to be the underpinning philosophy rather than the people who had the power seeing any reason to change.

Next up is the Shaming and Finger Wagging approach where leaders and colleagues who don’t behave in the right ways or use the right language are placed in the spotlight to encourage them to change.

Now I’m not for one moment suggesting that discriminatory or offending behaviour shouldn’t be called out. But I do feel that the key to becoming more diverse and inclusive is the ability to discuss openly and honestly. Anything that discourages that open discussion or leads people to be disingenuous for fear of saying the wrong thing is a problem.

Finally, perhaps the most common D&I approach of all; the Busy Bees approach where we flood our organisations with numerous initiatives and programmes.

No D&I team that I have ever worked with was short of ideas or energy! But a lot of this energy gets diluted through the multiplicity of activity. Not only can this be confusing and exhausting but often these programmes are seeking short term results and are superficial rather than a long-term programme to achieve genuine cultural change.

The new approaches to D&I

So, if these tried and tested approaches are failing to deliver, what does work? What we’re seeing are a number of pioneering organisations who are genuinely trying to do D&I in different ways. In Part two of this series we’ll look at some specific examples but to finish off this one, here is a summary of the new trends we’re seeing in D&I.

This might sound counter-intuitive but smart companies understand that a truly inclusive organisation is not one that treats everybody in the same way, but instead uses data and insights about people’s differences to help them customise their approaches to communications, engagement, development and leadership, etc to ensure their particular needs, wants and preferences are accommodated.

We’re seeing companies beginning to reject the big diversity programmes in favour of getting to the small behavioural nudges which add up to a real cultural change. Whilst this approach may not make as much noise as a big initiative, it has a much more sustained impact and can help leaders engage much more easily.

3. Focus on the conversation.

We know that change doesn’t happen simply because people are presented with a sound business case, given a bunch of targets and told to get on with it. If that was the case we would be delighted with our D&I progress. Instead, organisations are starting to invest more in helping people to have conversations which enable greater understanding, increase empathy and provide a safe environment to explore how it might be different. Again, less of a fanfare but powerful.

If you lead a team of people, then you know that avoiding unconscious bias and engaging with people who are different to you can be much less comfortable than having a team of like-minded colleagues with whom you share background, class, culture, and even hobbies. Our brains are wired to gravitate to what is easiest and so if we are going to get leaders to behave in new ways which are more uncomfortable for them and make their brains work harder, then we have to find ways that make it easier for them. Companies are starting to realise that just sending people on an unconscious bias training programme is unlikely to make any difference – not because they are bad human beings but because they are normal human beings! We’re seeing some really innovative practices that make it easier for leaders to do the right and different thing. Use of technology, small interventions to traditional processes such as the interview and timely challenges from HR can do just that.

So, maybe time for HR to take a good hard look at what we’re doing to drive a more diverse and inclusive organisation and question its efficacy. There’s evidence that these new approaches can drive real change and in part two we’ll look at some real-life examples.

Why not take a look at the Disruptive HR Club – a global online network for people who want something different from HR. 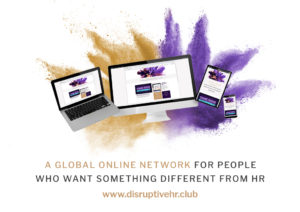 Leading through disruption (The EACH Model)

Find out how to lead through disruption using the EACH model – Employees as Adults, Consumers and Human beings.

We’ve put together a few tips and an example of a Head of Diversity job spec to help you get started with creating an inclusive culture where everyone can do the best work of their lives.

Watch our animation looking at the wave of new trends in hiring that can boost your employment brand and transform the experience for hiring managers, candidates and HR.