How leaders can create trust

Every year the PR giant Edelman publishes a global survey on one issue – trust. It considers the levels of trust we have in our public institutions, technical experts, each other – and our business leaders. Whilst the latest results have seen an increase of trust in CEO’s from a low of 37% a few years ago, nearly half of us still believe that they are untrustworthy. This has serious implications for the ways in which we have traditionally led our people; command and control, the leader as superhero, communications broadcast and cascaded from the top, etc. If people are less inclined to trust in business leaders, then these approaches are fundamentally flawed.

Trust matters more than ever

Does it matter that trust in leadership remains so low? I believe the need for people to trust their leaders has never been more important for three key reasons.

Firstly, trust equals money. When 84% of global companies’ market value is comprised of so-called “intangible assets” – goodwill, intellectual capital and brand equity – the ability of employees to impact that value is significant. Gone are the days when a disgruntled employee would simply moan about their leader in the pub with a few mates. Now they can inform millions. Just look at how AOL’s Tim Armstrong’s sacking of an employee in a big meeting went viral in a matter of hours. Look at the rise of Glassdoor, the Tripadvisor for places to work. Employee power is growing and lack of trust in leaders can cost companies dear.

Finally, in the knowledge economy leaders need their people to consciously give them their ideas, their creativity, their connections and their opinions. In a world where technology has provided so many more choices about where and how we work, leaders need to be seen as worthy of that choice.

Having been a member of the BBC leadership team that oversaw the Savile crisis and its severance scandal, I am clearly not speaking from a position of moral authority here – but hopefully with a degree of understanding and humility! There are some things we do as leaders that destroy trust every day. I’m not talking about the big unethical stuff, but rather some really basic things that we do every day, often unwittingly, that erode the relationships with our people. For me there are four key things we do as leaders that destroy trust and I should point out that I have probably been guilty of doing all of these at some point in my career!

Something weird happens to people when they communicate as leaders. We forget all of the communication techniques that we use with our friends and families and develop a “corporate personae” that is almost devoid of any humanity. One day at the BBC, I got a call from a guy in News who wanted to be helpful by explaining to me that “my emails were crap” and I should “get someone else to write them for me”. I was slightly taken aback as this was precisely what I had done. My emails were usually written with several other people – people in HR, people in Legal, people in the press team and people in Internal Communications. But to humour him I went back over some of my recent missives and realised with dismay that he was right. My emails were crap. They seemed pompous and sterile, lacking any humanity or humility. I had adopted the royal Executive “We” and, in an effort to be accurate, I had “lawyered-out” any personality.

Leadership comms often ignores the power of storytelling that could create a bond with our listeners and we rely too heavily on one of the single biggest destroyers of humane communications – PowerPoint. We push deck after deck of dry analysis at them believing, wrongly, that the power of logical argument will build buy-in to our ideas. During the period when we were trying to communicate the need to reform the BBC’s pension scheme, the trade unions’ leaflets were so much more powerful than the corporate line. They posted images of fat, overpaid BBC executives who cared little for the staff and produced caricatures of the Director General and his team that had an almost pantomime villain quality. The leaders talked about mortality rates and interest rate risks. A futile attempt to combat emotion with analysis.

Of course, it is hard to walk into a room of angry staff. No leader relishes facing their team after announcing job losses or pay cuts. But it amases me how many of us take the money that goes with the senior role and yet become invisible when it gets tough. In every period of difficult news “Hunt the missing Exec” is a favourite pastime and yet this disappearing act damages our employees’ faith in us to do the right thing.

The increasing emphasis on transparency has led many public sector bodies to publish expense claims of its senior leaders. Whilst the press focus on the more luxurious claims – a bottle of champagne or a posh dinner – what annoys employees the most is the smaller claims – the postage stamp or the cappuccino – by people who are on six-figure salaries. We’ve all seen these small abuses of privilege and some of us have been guilty of doing it; the demand for a good parking space, the slightly better tech than everyone else, no hot desking for the Execs. It does us no favours and we come across as mean-spirited. You wouldn’t trust a friend who demanded petty privileges so why would you trust your leader?

As leaders we expect to be trusted by employees but it’s very much a one-way street because we certainly don’t appear to trust them. So many of our rules and policies have been developed because someone did something bad once and a rule was developed to prevent anyone doing it ever again. We all have the “Stop Them” Policies and indeed hours of our time go into enforcing them. Think about your own employment contract. It will probably tell you how much you are going to be paid, the hours you are expected to work and the 30 policies that if breached, will result in you being fired. Hardly the opening gambit for a trusting relationship!

The three things leaders can do to build trust

So how can leaders build a more trusting relationship with their people? Clearly, there are some bigger questions around business ethics, regulation and transparency, building purpose or pay differentials between leaders and their people. But what are things that leaders can do every day to build better relationships? I believe there are three changes they can make.

You can only have a relationship with people you actually know. It’s not enough to try and engage with large groups of employees as if they are a homogenous lump. You wouldn’t engage with your customers in such an unsophisticated way; we invest significant amounts of time and money trying to know their likes, dislikes, ways of thinking and behaving. Yet we rarely apply this to our own people. 80% of us still only survey our people once a year and then produce actions plans that aim to show “we’ve listened”. We need to learn from our colleagues in marketing about customer data and insight and creating leadership communications and approaches that are based on their varying needs and wants. But there is also room for more traditional forms of relationship building too. The Coop recently looked at what their people really wanted from their leaders. What came back surprised them in its simplicity. They wanted to be listened to, to feel that their leader was interested in them and to have honest conversations with them.

If we are going to build trusting relationships in the new world, we have to create working environments that have at their very core, a belief that our employees are decent, adult, human beings who can be trusted to behave well. If we changed our contract of employment to one that is not written with an eye on future tribunals but is about a mutually trusting adult relationship, how different would it be? If we tackled the individual who had behaved badly without creating new rules to prevent anyone else behaving that way, how empowering would that be? If leaders stopped believing that they have to the answers to preserve their status and instead said ‘what do you think?’ or ‘I trust you – use your judgement’, how much more empowering is that?

Showing humility is rarely one of the qualities we look for in our leadership selection criteria. But I believe it is making a come-back. Our collective futures depends upon our leaders’ abilities to build partnerships, to collaborate more effectively with customers and competitors, to spot new business opportunities and threats early and to be agile in response, to manage diverse and virtual teams and to create environments where individuals can flourish and cope with uncertainty. We’ve all worked for or with the narcissist or the psychopath – these are not the people who are capable of leading in this new world. We desperately need some lower ego leaders in the future who get their kicks from enabling and creating environments where their team can do their best work, rather than through their own personal glory. And what about the leaders we’ve already got? Well, we have to help them be the very best human beings they can be. We need to encourage them to let their guard down, to understand the positive impact of humility, to use emotional stories rather than just sharing data, to be visible when it goes wrong and take the flak – to see niceness as an asset, not a weakness. Only then can we start to build the trust we so desperately need.

If you’d like to get blogs from Disruptive HR straight to your inbox, you can sign up here.

Or if you’d like to get all of our workshop content at a time and place that suits you, why not check out The Disruptive HR Club? Packed with resources to help you change HR. 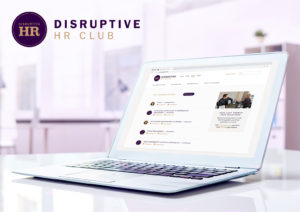 Get even more Disruptive HR content and join our Club – the go-to place for people who want to change HR!

Rewards should be something that every employee enjoys and yet we persist with expensive, complex and onerous bonus schemes that often have a negative effect. This blog looks at how to really make your people feel rewarded.

HR is dependent on people managers being better at their jobs. This blog looks at how we can help them get better at the people stuff.

Whilst it's often easier and cheaper to implement one-size-fits-all processes, they rarely deliver results. If we are going to genuinely change behaviour, we need to become the human not process experts. In this blog we explain how.